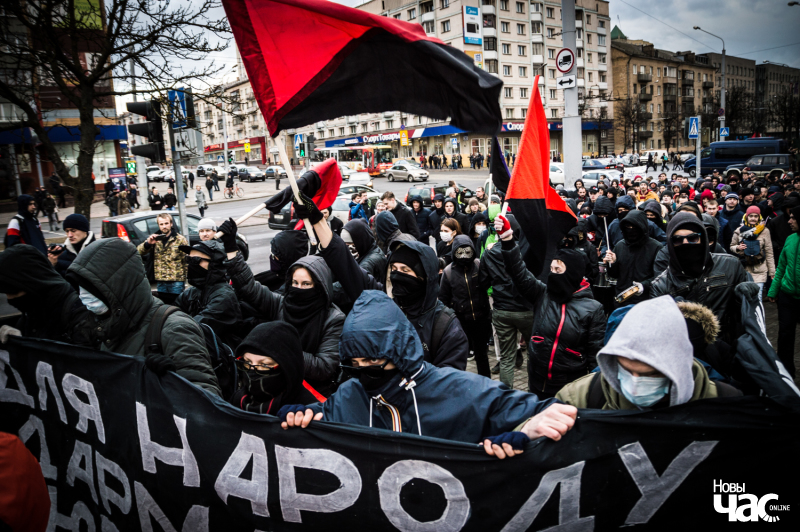 Today in three major cities of Belarus – Minsk, Mogilev and Grodno – people took the streets protesting against government attempts to collect tax off the unemployed (details of the story HERE). In Minsk, demonstrations managed to gather more that 1 500 people, in Mogilev and Grodno 1 000 each. These are the biggest protests those cities have seen in decades. It is worth mentioning that most of the protesters are far from major political powers in the country and do not align with any opposition stream, rather prefer to point out the hard economical conditions and results of 24 years of Lukashenkos rule.

During the whole demonstration, 20-30 civil cops were constantly following the anarchist block and at the end of the demo tried to arrest some people. Anarchists together with other participants of the demo managed to unarrest people and get into public transport – a tactic that was quite successful in the past months, when anarchists managed to get out safely. However it was stopped a couple of minutes later by a bus without license plates and civil cops rushing into the public transport. To get the people out , the pigs used not only brute force beating up people, but also pepper sprayed the trolleybus (an action one of the football hooligans got 10 years in jail for in Belarus just last week). At the end of the confrontation, around 30-35 people were detained including several bystanders, who were trying to help people resist the police. By the end of the day, some activists were beaten up so badly that the cops had to call an ambulance.

Right now, all the arrested are in jail in Minsk police stations awaiting trial tomorrow. Judging from recent developments, most probably they will be punished with 15 days in jail.

Furthermore it has been reported that over 9 people from the demonstration were detained in Mogilev. Their destiny is not clear yet.

Lawyers and food parcels are covered so far by human right activists. But you can always support people with solidarity actions next to local embassies or Lukashenko’s mansions. Apart from that you can share the news, and make the topic more visible around you.

By the moment this article is written, over 150 people were detained and sentenced to fines or some short prison terms for protests in last weeks in Belarus.